Benji Lanyado is the founder and CEO of Picfair, having learned to code and built the first versions of the site himself. As a journalist, he became obsessed with the crossover between journalism and technology, and his desire to work closely with engineers led him to becoming an engineer “by accident”. 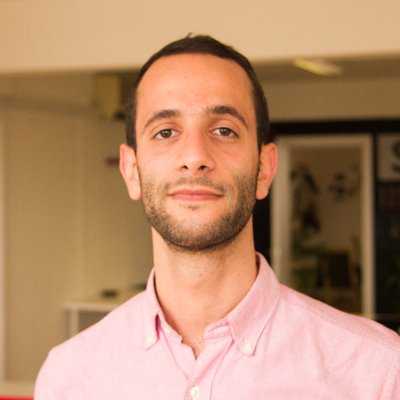 When and why did you learn to code?

“I learned on General Assembly’s first course in London. I’d been a journalist at The Guardian for 8 years, mostly working as a travel writer. Despite being friends with many of the engineers there, we had this classic problem where all the editorial staff were on one floor and all the technical staff were on another. I was desperate to work with them, and went on a bit of a campaign within The Guardian to unite the two floors, but kept hitting obstacles - it was very hard to make a big organization change in that way.”

“Eventually, I left. If I wanted to work with developers, it’s seemed like a good idea to learn some of their languages. A friend of mine, Rik Lomas, had become a teacher for GA and suggested I joined the class (Front End Web Development). I knew I wanted to work with programmers, and then I sort of became a programmer by mistake!“

How did you find learning to code?

“I completely fell in love with it. I loved how creative it was. Whereas previously I’d had to fight and plead to get access to developers, I could now have ideas and execute them myself. Rik is an unbelievable teacher - truly one of the best teachers I’ve ever had. He’s since gone on to launch the online learning company Superhi, so is now helping thousands of people across the world learn how to code”

“I launched Redditedit for my final course project - a way for looking at trending headlines across different news themes. Rik then went on to teach GA’s Ruby on Rails course as well, so I followed him on to that. This was when General Assembly was on the top floor of White Bear Yard, a well-known startup hub - having felt a bit lost after leaving The Guardian, it became a sort of new home for me.”

How did you use your coding skills initially?

“At first, I positioned myself as an interactive journalist, building digital-first stories. I knew first hand that getting digital projects built at news organisations was really difficult, so I offered to do it for them as a freelancer - for the Guardian, Rough Guides, and a few others. It was a pretty rare thing at the time to be able to write a story and then also produce the interactive content to go with it. It also meant I could charge more for my services!”

How did you start Picfair?

“After I’d learned to code and was working as an interactive journalist, I then injured my knee playing football and had to spend a month off of my feet. So I built the first version of Picfair lying on my couch. When I launched it in beta, I messaged every photographer I knew. Then I asked them to intro me to someone else, and within 2 months we had maybe 10,000 images. So there was a bit of traction there.”

“But it became clear quickly that to make this a real thing I would need to raise some money. When I started to fundraise, I wasted a lot of time speaking with big VCs who I now know would never back a first-time founder with a barely-working product. Only later did I realize angels were the better route for me.”

“So I put the initial seed round together with some really great angels. General Assembly had tweeted about Redditedit to Alexis Ohanian who responded and said he liked it. I used that to get an intro, was able to track him down to a coffee shop in Brooklyn, and Picfair became his first non-US investment. I was able to pull in other investors around him such as Tom Hulme of Google Ventures and the Jennings Brothers who had founded VoucherCodes. I think the fact that I had learned to code and actually built the thing made them more willing to take the risk. It really does all lead back to that initial GA course.”

To learn about Benji’s fundraising journey in more detail, read his post A Rookie’s Guide to Raising Investment.

What advantage do you have as a technical entrepreneur?

“Initially, it meant that If I had an idea, I could do it myself. That’s what happened with Picfair. Half the battle as a startup founder is working out how to build the thing you want to build. In my case, I could build the first version of Picfair completely on my own. That is what drew me to coding. It’s the creative potential of it.”

“While I don’t code much these days, being tech-literate still helps massively on a day-to-day basis as a founder. It means you understand what’s possible, and how things get built. It also means your relationship with engineers is more collaborative, rather than just telling them what to do. It means you can really understand the full organism of a business, end to end.”

“I must admit that I do sometimes miss writing code every day, but it’s a good thing that I don’t, as Picfair’s engineers are so much better than me! It was also better for Picfair that I was a good founder rather than an average engineer. I still make small side-projects. I made a website for my great-grandfather’s war diaries. I paired with Sev Furneaux who was on that first FEWD course with me.”

Where is Picfair in its journey now?

“I always felt that sourcing local photos from local photographers yielded the most interesting perspectives. So I wanted to build a product that supported that. The original idea was something like a democratised Shutterstock, bringing undiscovered and local perspectives to the publishing & marketing industries. You allow anyone to upload images, and use technology to get the best images to rise to the top. The major challenge to start with was liquidity - having enough photos. You also needed technology that could ingest all those pictures and curate them. Those were the 2 major technical challenges. So the first 2 years were focused on that.”

“After a few years we had about 5 million pictures and were generating revenue, and a number of large publishers were regularly sourcing images on Picfair. But our fair trade business model - we give photographers the best royalty cut in the industry - made the margins hard, and the route to profitability difficult.

“Our job now is to attract lots of photographers, help them sell images, and also hope that enough of them choose to upgrade their stores from free to paid. Alongside the pros, photography is one of the largest hobbies in the world, so there are now millions of fantastic amateur photographers out there. Our goal is to continue scaling this new business model.”

What do you think about more and more people learning to code?

“The truth is, in terms of understanding how technology and the internet really works, 98% of people still don’t know.”

“More than anything else, learning to code nurtures your ability to solve problems. Even if the technology sector falls apart, problem-solving will always be valuable. So I can say with 100% certainty that learning to be an engineer will make your career prospects better. It will arm you for the future of work. I will never stop being optimistic about how learning to code will transform your professional life.”


Benji’s story is a wonderful combination of curiosity, persistence and serendipity. By allowing himself to follow his curiosity, he learned a powerful new skill. By learning to code, he was able to build his MVP independently. In becoming tech-literate, he became a better hirer and manager of engineers. And throughout, his appetite to build side-projects and launch ideas has made him a magnet for opportunities.