I spoke to Jamie Allen, a contracting front-end developer. Jamie studied at Makers Academy back in 2014, making him an early adopter of coding Bootcamps. 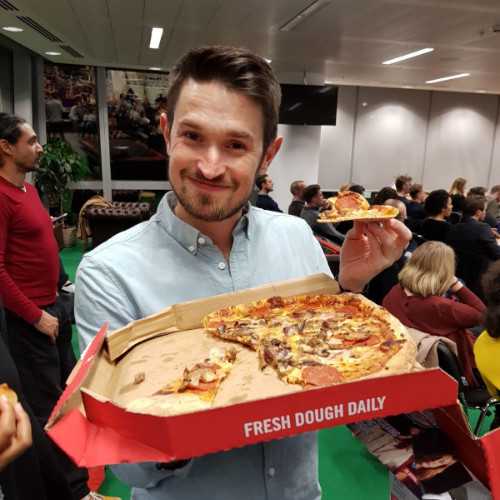 “I was working for a marketing and advertising startup in London doing copy writing, design and product management for their mobile app. The development team was based in Spain. Work went over to the dev team in Spain, and - like many ‘non-techies’ - I wondered what took up the time. I really wanted to understand exactly how the stuff we sent over was being created and what the process looked like.”

“To help work this out I started doing Codecademy online for around 6 months. Just basic Ruby, JavaScript, HTML and CSS. I finished a couple of courses. I enjoyed them and began trying to think of ways to get a job in tech. After some research I figured I had three options: a) self-learn b) do a Bootcamp c) go back to University. Self-learning felt like a huge time sink and not guaranteed to get me a job. University felt expensive and a large time investment. The Bootcamp seemed like the best combination of speed and opportunity to get a job, so thought I’d give it a go. Makers Academy seemed really hands on and I knew that’s how I learnt best. It also got cleared for Career Development Loans about two months before I signed up, so I applied for the loan and went for it and lived on my mums sofa for the duration of the course.”

For a detailed discussion of the different ways to learn coding, see our post Bootcamps vs. Other Learning Paths.

You did a Bootcamp in 2014 before they were more common. What gave you the confidence to go for it?

“Having worked in a startup incubator I knew how many companies relied so heavily on developers. I was surrounded by companies typically with 70-80% of the team being developers. It just always seemed where the real action was, so I knew there would be plenty of jobs around. Also there didn’t seem to be loads of other career options for me. In hindsight I didn’t really enjoy advertising and marketing so wasn’t driven to push on in the industry. Having done Codecademy, I knew being much closer to the product would be far more up my street.”

How was Makers Academy? Did it meet your expectations?

“Makers Academy was pretty amazing. It was really really hard. I was probably in the bottom 20-30% (or certainly felt it) throughout the course. I had a great time, learnt tons, but I’m just not a very quick learner and it felt like every time I was about to get a handle on something we’d move on. Looking back I can see how valuable it was to get such a broad range of experience though. Teaching TDD to people who can’t program yet in a week was always going to be a stretch! It exceeded my expectations to be honest, but I didn’t fully realise that until after I left. The practices they teach there are absolutely spot on in terms of writing code for other developers and constantly refactoring. Things which are still often overlooked in industry even amongst experiences developers.”

Why focus on front-end development?

“I focused on frontend for a couple of reasons. Mainly I found ‘proper programming’ really hard at first. So sought comfort in HTML and CSS which are much easier to learn and be comfortable with. I also just really enjoyed how instant the feedback was in terms of making changes and seeing them on screen. In the final project on my team pretty much everyone hated the HTML + CSS part, so I was happy to be the ‘frontend guy’. Also we did a lot of Ruby on Rails on the course and I found the ‘magic’ parts just completely impossible to get my head around. JavaScript was just so much easier to understand for me.”

“One tip would just be that there is no upper limit or prep or learning you can do. Tech is hard because it’s such a big field so without direction at the start you can end up learning completely irrelevant stuff. Once you have your pre-course material I’d just get as completely immersed in the material as possible. So rather than just thinking, ‘yep cool I’ve learned the bits they told me’, I’d do that plus anything related you can think of. I’m 100% sure if I went back to the course and did it again now I’d still learn loads of stuff. Another tip is to try and and really focus on a few specific things you’re comfortable with rather than tackle everything. When trying to get a job, having two or three things you can say you’re really comfortable with can help a lot.”

“Mainly just the range of opinions. When you come out of a Bootcamp you might think ‘this is the way things should be done’, but in reality there are always a million ways to do the same thing. I worked with people who thought everything had to be done in the ‘perfect’ way, plus other people who would just get stuff done as quickly as possible regardless of the long term implications. In reality neither are probably right, but it was really helpful in pushing towards defining my own opinions.”

What’s been the biggest challenge in your software career?

“The diversity in most places is shockingly bad and is something that leaders in the tech industry need to step up to and properly address. It’s quite relentless how common it is for companies to value technical skills over all else, despite the job encompassing far more than that and I think diversity is what gets sacrificed because of that. Most companies complain constantly about ‘not being able to get the right people’, but put their own walls up in terms of tech tests, ‘needing 5+ years experience’ or ‘needing to have a CS degree’. I’ve been at places where people profess these things as necessary right in front of me despite having hired me (hopefully not because the hired me!). It’s really common to not put nearly enough value in qualities like communication and eagerness to learn. Until lots of us ‘slightly-less-technical’ types make it into management and hiring positions it’s probably not going to change. Maker’s Academy and other Bootcamps are doing an amazing job at breaking down these barriers by getting people of a far more varied set of background into the industry.”

How has the tech industry changed as you’ve become more experienced?

“I wouldn’t say the industry has changed hugely since I started out but I’ve changed a lot. As I get more experienced I am just far more aware of the downfalls of the industry and don’t let them affect me as much. I still have job interviews now where I get told I don’t know enough JavaScript.”

“In terms of job security, I’ve found that most places just really really need people to build stuff, so it’s been totally fine. For me it’s been a great way to see multiple different companies and different ways of working. It’s really flexible as you have no specific holiday days, but obviously you don’t get paid if you’re off. I feel like it’s accelerated my learning, but that’s not to say you can’t get that from permanent work either. You have to accept that some companies treat you differently and keep you at a distance. You do have to be confident you’re able to do a good job, but if you are I’d recommend it to anyone.”

“I’m most optimistic about giving people the chance I had, plus helping address the diversity issues in the industry. I think everyone will benefit from it. Makers Academy was pretty life changing for me and I was also very lucky at multiple different times. I’d like to help give others that sort of opportunity.”


It’s amazing to hear someone describe their Bootcamp experience life-changing. Jamie’s story shows how you can edge into coding using online learning before committing to a Bootcamp and transforming your career.