Rachel Dolan is a full stack web developer at Dunelm. She graduated from General Assembly in 2018, having previously worked in business development in the PR industry. 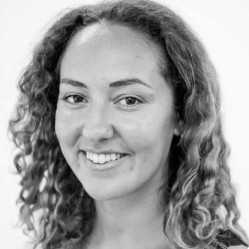 Do you focus on front-end development? Or full-stack?

“Full-stack. Going into my second role I did consider specialising as I’d seen a couple of positions available at companies that I was really excited about for either front-end or back-end, but in the end I decided that I wanted to remain full-stack as I enjoy working on both.”

How did you find getting a first job?

“In short, easier than I’d anticipated. I was a ball of anxiety going into the job search. I spent a lot of time stressing that I wouldn’t get a job and I’d often find myself thinking of worst case scenarios. Whilst this was not particularly conducive to the job search, the fear of not getting a job meant that I worked really hard after the course to get a job. The outcomes team at General Assembly were amazing at preparing us for the job search. Definitely some highs and lows, getting my first code test and having no idea where to start with it felt awful and made me question everything, but being offered interviews felt amazing - and getting job offers just felt like everything was falling into place.”

What was different about getting your second job?

“Getting my second job was completely different. With the first job search potential employers understood that I had zero experience and even though I’d done a Bootcamp, in the grand scheme I knew very little. All I could do was show what I’d done during the Bootcamp and demonstrate that I was interested and excited about development. Going into the second job search I felt like I had more to prove as I’d been working as a developer for 2 years. But really I found that the process was the same, the biggest difference was that I knew more about what I wanted from the role and felt better prepared to make decisions about what roles to apply for.”

How was General Assembly? Did it meet your expectations?

“General Assembly was exactly what I was looking for. Once I’d made the decision to leave my career and pursue becoming a software developer I was keen to get going and do everything that I could to make it happen as quickly as possible. Everyone told me it was going to be really hard work and I wouldn’t really have any free time, but I wasn’t quite prepared for just how intense it would be. Evenings and weekends were mostly spent working, I didn’t see many of my friends and even when I did I found it hard to switch off from the course - I even had coding dreams. It’s 100% worth it, as only 3 months later you’re ready to get a job. But it was hard going, especially during the summer when England came close(ish) to winning the World Cup and most of the country were celebrating.”

“I had a friend who had previously done General Assembly and had gone on to be a really successful developer. So once I decided that this was definitely the career that I wanted, I felt confident that a Bootcamp was a legitimate gate of entry into the industry that genuinely did provide enough training to get you where you need to be in order to land your first role as a developer.”

What advice would you give to new developers hunting for their first job?

“Don’t settle. You know more than you think and even after only 3 months of experience you’ll make a good addition to a team, so make sure it’s the right team for you. I was lucky in that one of my first job offers was for the company I ended up working for first, and it was a really great fit for me - but honestly, I was so concerned about getting a job that I probably would have settled for a company even if it wasn’t the right fit.”

“First, trust in the Bootcamp. At times it feels like you’re moving too quickly through the content and before you’ve fully grasped one topic you’re on to the next. Personally, I had that a lot, and at times thought I’d never get it but it does come if you follow the programme and put the work in. At GA the course is split into 4 projects, and project week is a really good time to practice what you’ve learnt and feel things start to drop into place.”

“Second, try not to compare yourself to other people in the class. There are always some people who seem to just get it straightaway, and it’s easy to panic that you’re not performing as well, but really it doesn’t matter. Just focus on the progress that you’re making.”

“Third, don’t try to know everything. The more I learnt on the Bootcamp the more I realised how little I knew, especially considering the fast pace of the industry and how quickly things change. To begin with I’d try to do extra research on topics that came up in conversation but I quickly realised that it was just too much.”

“The biggest surprise is probably realising that all developers I’ve worked with use google for everything. During the Bootcamp I tried hard to memorise things, and was worried when I couldn’t remember how to do something, but I realise now that there’s no need to remember everything, because there are usually answers online for anything you need to do.”


Rachel is a great example of someone who worked hard to make a career transition to tech, battling through some anxiety and occasional self-doubt. Ultimately, her patience, effort and long-term view carried her through and now she’s enjoying her new career. Thanks for sharing your tips, Rachel.